Social security in the BRICS countries

Social security in the BRICS countries

The term BRICS refers to the countries of Brazil, the Russian Federation, India, China and South Africa, which together count for over 40 per cent of the world's population and 27 per cent of global GDP.

In recent years, the BRICS countries have gained an increasing international prominence, not only for their rapid economic growth and corresponding rise in political status, but also for their substantial commitment to social protection and the remarkable extension of social security coverage.

In view of these significant trends, the International Social Security Association has launched a project to monitor social security developments in the BRICS countries, with special emphasis on the extension of coverage.

In Brazil, a combination of strong economic performance and progressive (contributory and tax-financed) social security policies in the last decade led to the expansion of coverage, accompanied by a decrease in inequalities. Between 2004 and 2014, formal jobs increased from 37.6 million to 56.5 million; the number of small and micro-enterprises contributing to social security programmes grew from around 2 million to more than 10 million; coverage of domestic workers rose from 28 per cent to 40 per cent; and more than 1.3 million vulnerable households benefited from targeted social security coverage. Lower levels of economic growth and evolving demographic trends will require further adaptation of the social security system to ensure that the gains achieved to date are sustained and strengthened.

The Russian Federation inherited a universal social security system from Soviet times. In the last 20 years, the country experienced a period of transition and has been subject to a number of significant social, economic and demographic challenges which placed strains on existing schemes, generating risks for universal coverage. To meet new challenges and growing inequalities, not least between rural and urban areas, a wide array of comprehensive targeted reforms and efficient policy measures, including various mandatory and voluntary programmes, have been introduced in key areas of social security.

While two decades of economic reform in India have brought noticeable changes to the way in which social security operates, the country's progress in term of social security coverage remains influenced by large informal and rural economies and high levels of poverty. Enabled by innovative use of ICT, new government programmes for food security, health care for the poor, and cash transfers have been introduced, and health care and occupational accident insurance coverage is being gradually extended across industrial centres. Community-based initiatives, including micro-insurance for health protection and micro-pension schemes partnered with private-sector actors, also provide access to social protection.

The past two decades in China have witnessed a significant and rapid extension of coverage under both contributory and non-contributory schemes, supported by management and administrative transformation and the innovative use of ICT. China has established a near-universal social security system based on social insurance (pensions, medical care, unemployment, work injury and maternity) and social assistance, centred on the basic pensions, basic health care and a tax-financed minimum subsistence guarantee implemented in all cities and rural areas.

Access to social security is a constitutional right in South Africa. Benefit coverage is widespread and all traditional risks are covered through the provision of tax-financed grants (old age, disability and survivors; family allowances), and contributory programmes for insured workers (sickness and maternity; occupational injuries and diseases; unemployment). These measures are complemented by other social support, such as access to health care, education and social services. South Africa has an important track record in improving access to benefits that is facilitated by the use of new technologies. 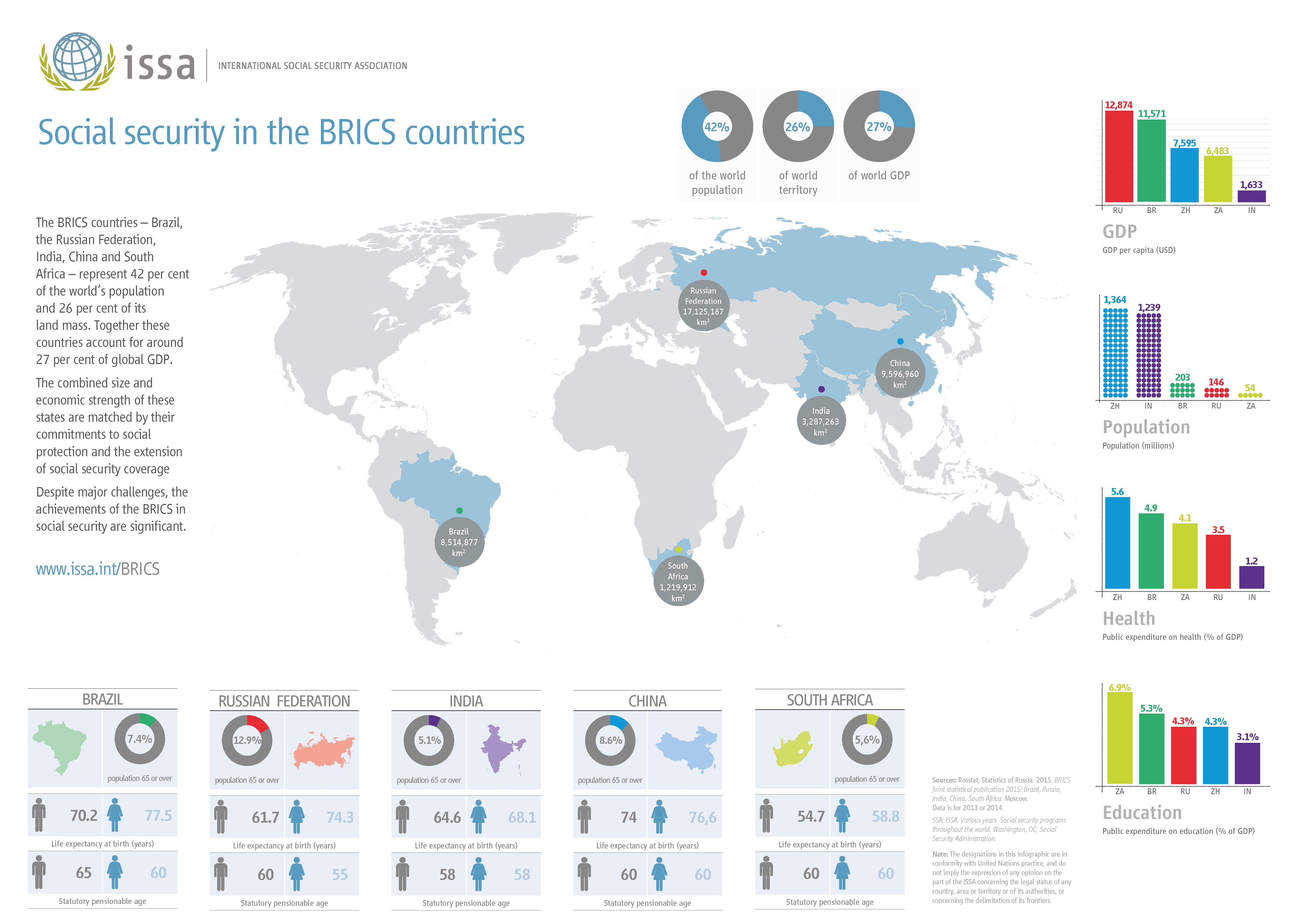