Our family grows! The ISSA Electricity, Gas and Water Section has the great honour to welcome ANDE, from Paraguay as a new ordinary member since July 2019. The Section has currently 58 members from 30 different countries.

Paraguay’s Administración Nacional de Electricidad (ANDE) is a state-owned power company that operates the transmission and distribution system of electricity, as well as part of the country's generation. It has more than 4900 civil servants, making it one of the largest public institutions in Paraguay.

ANDE formalized its membership during an official act at its headquarters in Asunción on 19 July of this year. Jens Jühling, Secretary General of the Electricity Section and Pedro Ferreira, President of ANDE, attended the act and officially presented the agreement between both institutions. The aim of this cooperation is the achievement of good safety and health practices in the electricity industry at an international level. As Pedro Ferreira said “ANDE is determined to improve everything related with safety at work to avoid accidents at work as much as possible”.

The ISSA Electricity, Gas and Water Section gives ANDE a warm welcome as a new ordinary member and looks forward to a long and effective mutual cooperation! 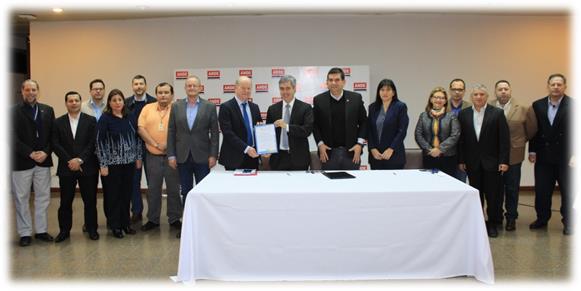 International Section of the ISSA for Electricity, Gas and Water