A unique role in the world of international organizations

The roots of the International Social Security Association lie in mutual insurance, the collective response of 19th-century European industrial workers to illness, unemployment, disability and old age. In the space of nine decades, the ISSA has expanded into a truly worldwide Association, bringing together more than 320 social security organizations in over 150 countries. With the immense challenges the world is facing, its commitment to promoting social security will be needed more than ever to secure social justice for all.

Following the First World War, social insurance schemes developed rapidly in several regions, and social protection was included on the agendas of the newly-established international organizations. In May 1927, for the first time, representatives of mutual benefit societies and sickness insurance funds were included among the national delegations at the tenth International Labour Conference, meeting in Geneva. The agenda included the introduction of international regulations for the economic and health protection of workers by means of social insurance schemes. A group of delegates decided to form an international association for the purpose of developing and strengthening sickness insurance throughout the world.

The International Conference of National Unions of Mutual Benefit Societies and Sickness Insurance Funds was launched in Brussels in October 1927. Encouraged by Albert Thomas, the first director of the ILO, delegates from 17 organizations came together representing some 20 million insured persons in Austria, Belgium, Czechoslovakia, France, Germany, Luxembourg, Poland, Switzerland and the United Kingdom. A Secretariat was established in Geneva, with assistance from the ILO.

In 1935 US President Franklin D. Roosevelt signed into law the Social Security Act, incorporating a new term that combines "economic security" with "social insurance". Negotiations for the affiliation of the US Social Security Board to the CIMAS were soon under way but were interrupted by World War II. In 1941, in the Atlantic Charter, President Roosevelt and UK Prime Minister Winston Churchill committed to improved labour standards, economic advancement and social security for all. At the height of the conflict, in 1942, the UK government published the Beveridge Plan, named after its main author, Lord Beveridge, which led to the setting up of the first unified social security system. In France, Pierre Laroque led government efforts to extend social protection to the entire population, and a national social security system was set up in 1946.

Commemorating 20 years of existence, the 8th General Assembly of the CIMAS ratified a new Constitution. From that time, the organization opened its membership to state-administered schemes such as those in the United  Kingdom, the USSR and the United States. Its combination of government departments with autonomous administrations made the structure of the ISSA unique in the world of international organizations. A new name was adopted: the CIMAS became the International Social Security Association (ISSA).

One year later, the UN General Assembly adopted the Universal Declaration of Human Rights, whose Article 22 recognized that "Everyone, as a member of society, has the right to social security". In 1952, the ILO adopted the Social Security (Minimum Standards) Convention (No. 102).

The Cold War entrenched the ideological schism between industrial nations. But this was also the era of decolonization and a third world force was on the rise that was to transform the ISSA into a truly global organization represented in all the regions.

Under the leadership of Presidents Renato Morelli of Italy, Reinhold Melas of Austria and Jérôme Dejardin of Belgium, and Secretaries General Rudolf Aladar Métall and Leo Wildmann, both Austrian, the three decades following World War II saw an increase in membership from 39 affiliate members and 21 countries represented in 1947 to 246 affiliate members and 104 countries represented in 1977, with associate members being admitted from 1955.

In 1949, the Social Insurance Institution of Turkey became the first of the ISSA's Asian members; their number grew significantly during the 1950s. By 1957, the number of Latin American countries represented reached 18.

Once the countries of Africa start to win their independence, ISSA membership there quickly grew too: French-speaking organizations lead the way in the 1957-67 period, with the number of English-speaking African members increasing markedly after 1967. Following a quarter-century of steady ISSA expansion, the 17th General Assembly in Abidjan in 1973 was the first to be held on the African continent.

The 1947 Constitution made provision for the creation of technical committees. This was to be the most significant constitutional provision for the ISSA's development and its method of work over the next 20 years. The first to be established were the Permanent Medico-Social Committee, renamed Permanent Committee on Medical Care and Sickness Insurance in 1971, and the Permanent Committee on Mutual Benefit Societies. Further permanent technical committees, subsequently called technical commissions, were set up in the next years, with the focus on family allowances, unemployment insurance and employment maintenance, prevention of occupational risks, insurance against employment accidents and occupational diseases, old-age, invalidity and survivors' insurance, actuarial and statistical issues, organization and methods, and legal aspects of social security.

The 1955 amendment of the Constitution provided for the organization of research, but it was not until the mid-1960s that the ISSA systematically began activities in this area. In 1966, a round-table meeting on the sociology of social security was held jointly by the ISSA and the International Sociological Association in Evian, France. The first research conference took place in Vienna in 1969. The Bureau created the Advisory Committee on Social Security Research in 1972. This was transformed into a full Technical Commission by the constitutional amendments adopted at the 26th General Assembly in 1998, placing research on the same footing as the other technical activities of the Association.

Under the leadership of Secretary General Vladimir Rys (UK), these years saw great strides in the development of regional and research activities and in the number and range of publications stemming from these activities.

The first regional programme, comprising regional meetings, conferences and training activities for the ISSA's four regions, was proposed and approved at the 19th General Assembly (Madrid, 1977). The role of the regional activities was recognized as an essential complement to the technical activities of the permanent committees. Accordingly, the first regional conferences of this era took place in Cairo (1978), Ottawa (1979) and Tashkent (1979). The research programme was incorporated into the Constitution at the 21st General Assembly (Geneva, 1983), though it had been in existence since the beginning of the 1970s under the monitoring of the Advisory Committee on Social Security Research. The first meeting of heads of ISSA member organizations in the Pacific took place in Fiji in 1989.

The ISSA developed its publishing programme, and launched its electronic data processing activities in the 1970s. The Associations' quarterly journal, the International Social Security Review , confirmed its position as the authoritative scholarly publication on social security. 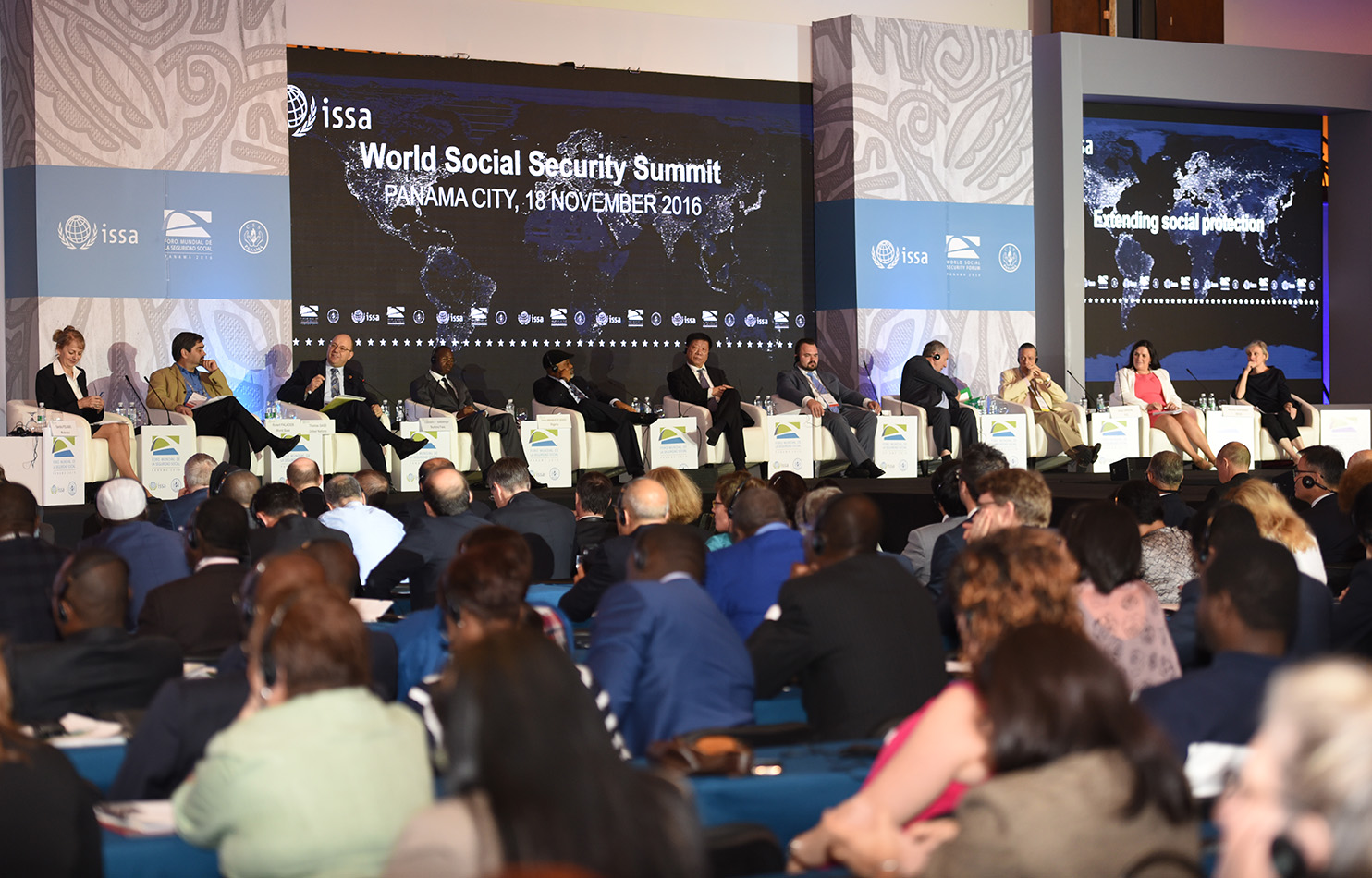 Towards the turn of the century, amid negative portrayals of the role and economic cost of social security, it became increasingly clear that the ISSA must intervene more actively in the growing worldwide debate by promoting a more balanced and informed dialogue among policymakers and by participating energetically in the international events where social security matters were deliberated.

At a meeting of the ISSA Bureau in Stockholm in 1996, under the presidency of Karl Gustaf Scherman, it was decided to create a forum for international dialogue on social security's essential role in social and economic development. Building on the successful outcome of the Stockholm Initiative, in 1999 ISSA President Johan Verstraeten launched a second ISSA Initiative, "Strengthening the security in social security", in Rome, with a view to enhancing the prospects for achieving universal and adequate social security coverage.

Under the guidance of ISSA Secretary General Dalmer D. Hoskins (United States), a significant development during this period was the adoption of new communication techniques to reach the ISSA members and the world at large. A notable example was the launching of the first ISSA Website , providing continuously updated information in the four working languages of the Association. Another significant development was the modernization of the Association's international databases that provide information on all aspects of social security, including regularly updated regional reports and country profiles. First produced on CD-ROM in 1997, the Internet version followed in 1998.

Following its 75th anniversary, the ISSA embarked on a new era. After the election in Beijing in 2004 of the first woman President, Corazon de la Paz-Bernardo from the Philippines, Hans-Horst Konkolewsky of Denmark was elected ISSA Secretary General with a mandate to build a New ISSA, a dynamic institution that adapts to changing realities and constantly matches its activities to the evolving needs of member organizations. In response to the global financial crisis, the ISSA and International Labour Organization (ILO) organized a Seminar on Social Security in Times of Crisis: Impact, Challenges and Responses in 2009, to help social security institutions tackle the situation.

During this period, the ISSA modernized its activities and services with the objective to become a knowledge-based service organization. The World Social Security Forum, the Regional Security Forum and ISSA international conferences became leading events on social security. In 2010, the first ISSA Guidelines on good governance in social security administration were launched, and another 12 different sets of Guidelines were subsequently developed. Building on the Guidelines, the historic ISSA Centre for Excellence was launched in 2013 to bring the ISSA closer to its members and support them through practical knowledge, solutions and value-added support services.

Innovative solutions and shaping the future

Supported by a strong global commitment to universal social protection 2030 as part of the SDGs and addressing labour market, demographic and digital transformations, the ISSA focussed on promoting innovative solutions to shape the future of social security. Working on strategies to address ten key global challenges for social security identified by the ISSA membership, the World Social Security Forum 2019 in Brussels was a milestone for the Association.

Elected in 2016 as ISSA President, Mr Joachim Breuer (Germany) contributed to strengthening the access of the ISSA to key international fora, including the G20 and the BRICS, and to raising ISSA’s voice and expertise in global debates.

ISSA members elected Mr Marcelo Abi-Ramia Caetano of Brazil as new Secretary General, upon Mr Konkolewsky’s retirement at the end of 2018. Mr Caetano set out to enhance the value of ISSA membership by making the ISSA more responsive to evolving member needs, and to effectively support members in achieving both administrative excellence and the dynamic development of social security systems. By means of relevant knowledge, practical services, access to key international fora and solidified financing and governance of the ISSA, the Association is in a good position to fulfil its mandate to promote social security at the international level, a mandate that has not changed since 1927 and is maybe more important today than ever.